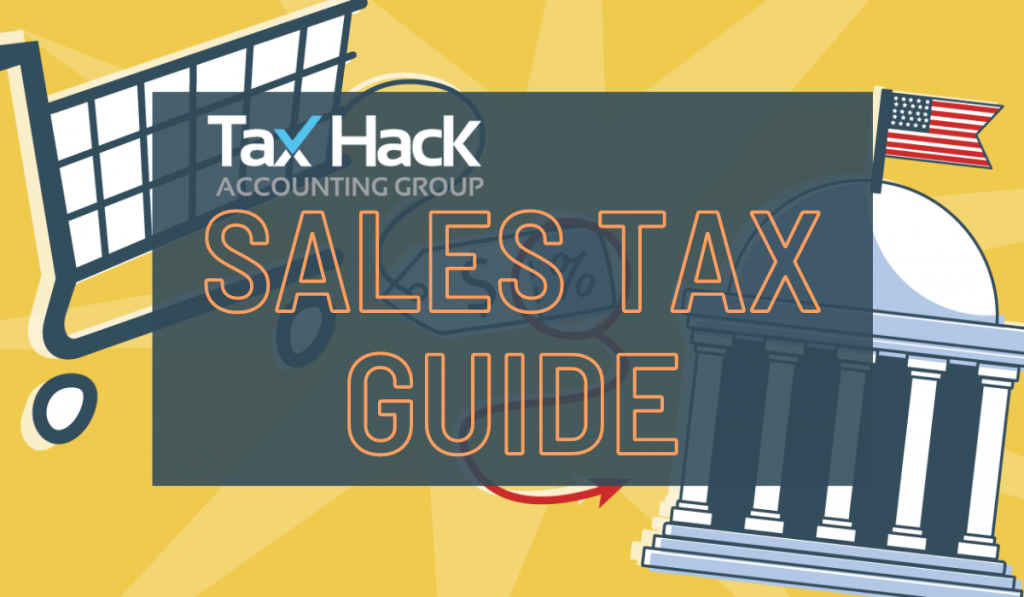 If you’re new to eCommerce, you might be struggling with sales tax. Accounting for Sales taxes can quickly become complicated, and your business may face serious penalties if you don’t get it right. This complete sales tax guide explains everything you need to know about state sales taxes, including how to calculate, collect, and pay them. Make sure you bookmark this page for later reference because you won’t find a detailed explanation like this anywhere else.

How to Handle Online Sales Tax

eCommerce is only a small part of the broader retail industry in the US, it is becoming an increasingly important way to shop. In 2019, US eCommerce was estimated to be approximately $600 billion based on consumer spending with online merchants, such as Amazon. This was nearly a 15% increase in online spending compared to the previous year.

In 2019, online sales made up 16% of all retail sales. However, the 2020 pandemic has led more consumers to rely on eCommerce to purchase basic goods and services. In the second quarter of 2020, there was a 31% growth in eCommerce sales compared to the first quarter; total eCommerce consumer spending was estimated to be $211 billion.

Greater consumer demand and trends in eCommerce growth raise questions about online sales tax, which will be discussed.

What is Online Sales Tax?

Any time goods are purchased, whether in a store or online, sales taxes can be assessed and collected at the point of sale. This varies from state to state and sales tax rates can range from 2% to over 8%. However, in 2012, it was estimated that about $12 billion of sales taxes were not collected and represented about 3.8% of sales taxes for that year. In an analysis of the economic impact of sales tax from 1960 to 2013, researchers found that sales taxes positively impacted economic growth in the short term, but the US economy generally responded negatively in the long term.

In the US, sales taxes are levied in 45 states and by local governments and municipalities in 37 states. With eCommerce, it can be a challenge to collect sales tax since customer billing or shipping addresses used for purchases may or may not be accurate and there are opportunities for tax evasion that impact tax collection.

Collecting online sales tax is becoming increasingly important especially due to current economic uncertainty and increasing trends in eCommerce. Some states heavily rely on revenue from sales taxes as an “own source” revenue. Overall, in 2017, this made up 35% of US states’ general revenue for the year, while local state sales taxes made up 11%.8  As a result of these governments’ and municipalities’ reliance on sales tax revenues, enforcement activities have increased in recent years to expand the sales tax base (the number of transactions subject to the tax) as well as penalties for failing to report and pay. 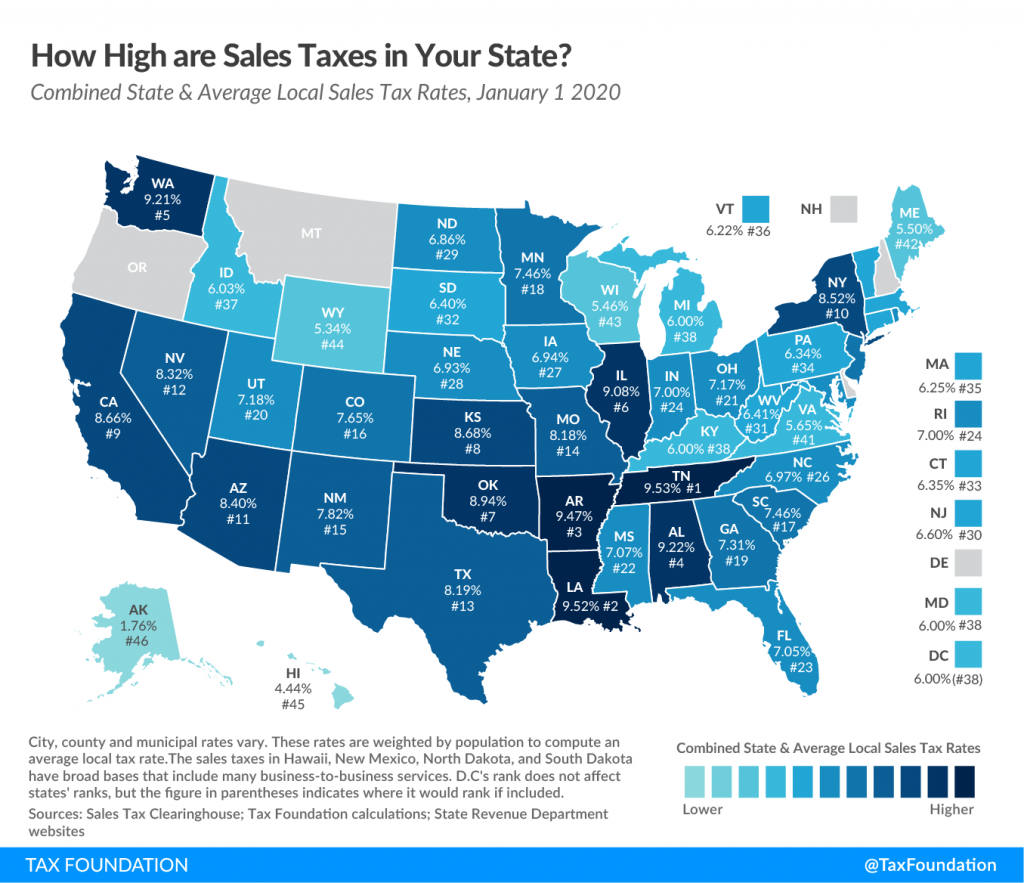 Among the 45 states that collect sales taxes, the highest rates are in California with a 7.25% rate; the following states have a 7% rate including Indiana, Mississippi, Rhode Island, and Tennessee.3 States with the highest local tax rates ranging from 5% to 4% include Alabama, Louisiana, Colorado, New York, and Oklahoma.

To compare with states that have major urban centers, the following is the average state and local sales tax rates in these states:

States with No Sales Tax

The following states do not collect state sales taxes:

When Do you Have to Collect and Pay Sales Tax?

Generally, for online sales taxes, a business must collect sales tax from their customers only if the company has a physical presence in the state. Nexus is the term used to describe the connection a seller has with a specific location before they can charge and collect taxes for eCommerce sales. If a business does not have a physical presence, they generally don’t have to collect a sales tax; compliance is placed on the consumer, but it is difficult to enforce compliance and collect taxes.

Click-Through Nexus began to address the online sales tax issue. New York was the first state to enact a click-through nexus law in 2008; the law identified the seller as the vendor if it entered into an agreement with a New York resident, and the resident referred customers to the vendor’s website. The law became known as the “Amazon law” in its effort to target large online retailers due to their efforts to engage New York residents in advertising as associates with a direct-access link to Amazon. Amazon and Overstock both filed complaints with limited success, which led to the elimination of associate referral programs. Based New York’s initial click-through nexus law, several states have adopted nexus statutes including California, Illinois, Michigan, Pennsylvania, and Washington among many states.

The interpretation of nexus changed significantly with the U.S. Supreme Court case South Dakota v. Wayfair, Inc. (“Wayfair Case”). 7, 8 The Wayfair case gave states the authority to collect online sales taxes from states that had no physical presence in those states.

It was particularly significant because it overturned a previous Supreme Court case Quill Corp v. North Dakota from 1992 that did not require sales tax collection if the retailer did not have a physical presence, nexus, in the state of the consumer. With the Wayfair decision, South Dakota’s policy to tax any business with sales over $100,000 or at least 200 transactions to collect and remit sales taxes to the state. Based on this Supreme Court precedent, many states implemented economic nexus laws.

As of 2018, 40 states enacted economic nexus laws based on the level of economic activity throughout the different states. Some states have a sales revenue threshold, transaction threshold, or both. The following is an overview of how the nexus laws are being enforced in major states:

Prior to South Dakota v. Wayfair, Inc., in 2014, Amazon began to officially collect sales tax in 23 states as a major online retailer.4 By 2017, it collected sales taxes from all states.

What about the sales of digital goods online? Digital goods include any goods that are stored, delivered and used in an electronic format. These goods are shipped electronically directly to the consumer through email or can be downloaded online. Common examples include music and e-books. Generally, digital goods do not include web hosting services, software, or data processing.

If you have an eCommerce business, keep yourself updated on the latest economic nexus laws and analyze your state-by-state sales on a quarterly basis. States will begin to focus on online vendors more as the eCommerce industry becomes a larger part of the economy. States will pursue sales taxes aggressively because of the economic losses caused by the pandemic.

Due to the Wayfair case, your business might have to collect and remit sales taxes to other states. Some states currently have taxes on digital goods for ebooks and streamed music, but not for other services like video conferencing or online learning.

Some tax-heavy states are also aiming to collect online sales taxes from marketplace third-party sales transactions. California and other tax-heavy states are also seeking to collect taxes from third-party vendors on Amazon as back sales tax. This may be surprising and unexpected for online business owners, which highlights the importance of staying updated on the most recent updates with economic nexus laws each quarter.

Sales tax is only one of the many financial hurdles facing your business. The TaxHack team has the experience and expertise to help you overcome your toughest accounting challenges. Sit down with one of our tax pros today and let us show you how we can help your business grow and succeed. Click here now to schedule a strategy session and let’s make your business better together.